With the launch of Internet Explorer 9 beta last month, Internet Explorer 6 can now call itself a great grandparent. The release begs the question — is anyone still using IE6? Unfortunately, yes. According to the web analytics company Net Applications, Internet Explorer 6 accounted for 16% of browsers during September 2010. Whether the reason is a workplace mandate, ignorance, or apathy, a considerable number of people continue to use IE6. 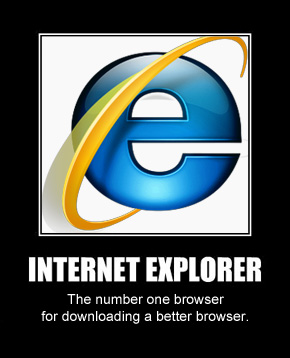 The web development community has long loathed Internet Explorer 6. Released on August 27, 2001, the browser does not support modern web standards and so requires time-consuming attention. Sites that render perfectly in Firefox, Safari, or more recent versions of Internet Explorer will appear broken in IE6. Some of its weaknesses include lack of support for: PNG alpha transparency, min-width and min-height CSS attributes, and hover states. To address these glitches, developers must write hacks and/or conditional comments specifically for this browser. IE6 also has multiple security weaknesses, and Microsoft continually releases patches that users must download in order to protect themselves. Thankfully, the pool of IE6 users is shrinking, and the value of supporting the browser is decreasing also.

Should You Care About the Users of this Antiquated Browser?

If you’re planning a site launch, you will need to decide whether or not to support IE6. Given the declining number of users and the additional coding time it requires, many developers charge extra to support it. Is the added cost worth it to you? IE6’s latest usage statistics can help you answer this question. The Wikipedia article, “Usage Share of Web Browsers,” suggests the following sources for usage information: Net Applications, W3Counter, Stat Counter, StatOwl, and Clicky.

If your launch involves a redesign and you have Google Analytics installed on your current site, you can easily obtain the number of IE6 users. This data will likely differ from the general analytics sites and may provide a better indication of your target audience breakdown. Last month on my site, Internet Explorer visitors accounted for 7% of traffic, and IE6 visitors accounted for only 0.64% of traffic. When optimizing my site for different browsers, this data helps me prioritize my list and concentrate on the majority of visitors. In other words, IE6 is not a priority.

Not everyone can refer to a current site, so you may wish to include some technical information in your target audience research. In addition to demographics, you can gather: common internet connection speeds, operating systems, and browser versions. This data will inform your project planning phase and help you decide on a supported browser list.

Large companies have eliminated IE6 from its roster of supported browsers. On January 29, 2010, Google announced that it was phasing out support for Internet Explorer 6. Google-owned YouTube and the web app company 37signals have ceased to support the browser. Whether these companies judged IE6 support to detract from their profits or if they wished to promote modern web standards, their actions will certainly nudge 2001 time-warp victims to upgrade. I tend to think the companies have the mental health of their development staff in mind as well.

When deciding whether or not to support IE6, you can refer to the general usage numbers, your site’s specific usage numbers, and your collected data on your target audience. Or, if you prefer to model Google, you can send IE6 users to a page that asks them to please, for the love of heaven, download a better browser.

One comment on “Should Your Site Support IE6 Users?”

Get the Bourke Design Quarterly Newsletter for small business owners and entrepreneurs.

Bourke Design is a one-woman studio in Portland, Oregon devoted to creating clean, intuitive websites powered by WordPress. On this page, I collect productivity and business-growing ideas for individuals, entrepreneurs, and small businesses.

My experiences as a freelancer and design firm employee, along with my training in design, have provided me with a solid education and fueled my desire to create smart online solutions for small businesses.